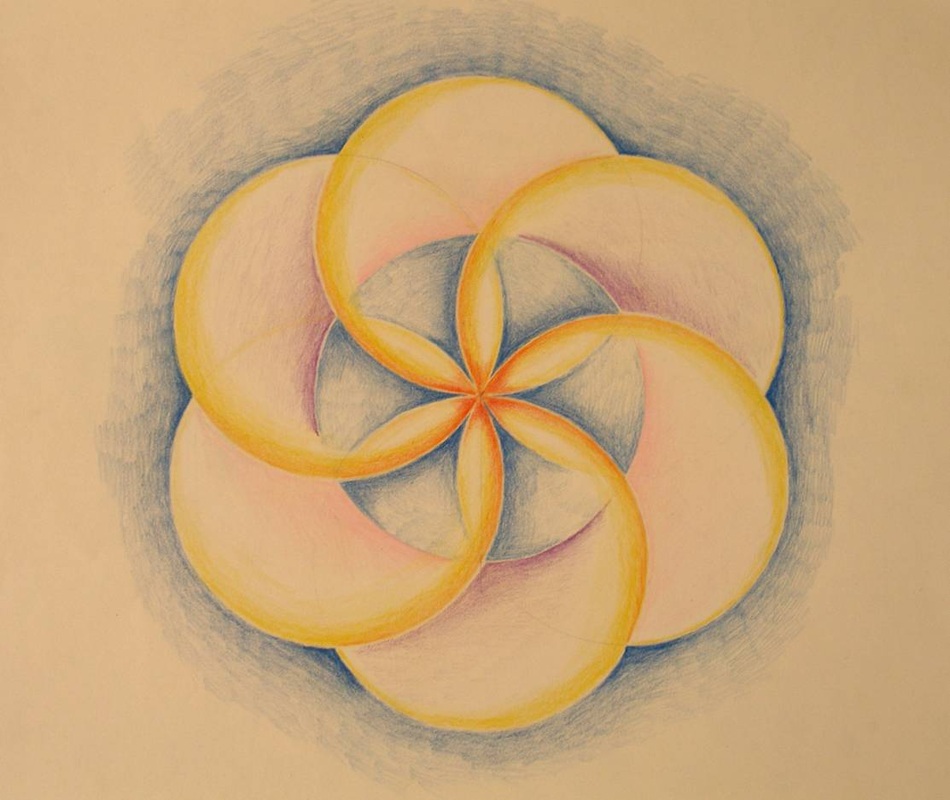 
This feeling for forms, their curves, their straightness, their rhythms and movements, is the new artistic experience which Rudolf Steiner wanted  to awaken. This sense for forms is the kernel of a new artistic experience: it is also the organ for a more lively understanding of nature forms. Thus one can realize the far-reaching importance of form drawing.

Method:
Before doing the actual drawing of the forms on paper, practice the forms by walking the form meaning for instance walking an imagined figure "S" on the ground. Secondly draw the form with the left then right hand in the air several times, and finally trace the imagined form with your finger on the drawing pad several times. Now after having completed the practice of walking and drawing the imaginary form, you draw the form using the colored beeswax crayons on the drawing paper in one movement without stopping or taking the crayon off the paper. Repeat the drawing of the form several times going over the previously drawn line or form.

The Seven Planetary Seals designed by Rudolf Steiner are very important to help us artistically awaken to the spiritual world and the stages of cosmic and human evolution.

​While serving as General Secretary of the German Section of the Theosophical Society, Rudolf Steiner introduced new artistic impulses into the 1907 Congress of the Federation of the European Sections of the Theosophical Society. He hosted this Congress in Munich, and his focus on reuniting the arts with spiritual life was a significant departure from previous gatherings. In Steiner’s words, at the 1907 Munich Congress he and Marie von Sievers led the way in providing “an artistic element directed toward the purpose of not leaving the spiritual life henceforth void of art within the Society” (from Chapter 38 of The Story of My Life by Rudolf Steiner).

Rudolf Steiner artistically created metamorphic Planetary Seals as an expression of cosmic and human development. The first five (of seven) Planetary Seals were printed in the program of the Munich Congress. However, the second through fifth Planetary Seals as printed in the program were incorrectly oriented – they were “rotated” out of their lawful relationship to the first Seal. Because this fact has been forgotten, the dynamic metamorphic principles expressed in the sequence of Planetary Seals have become obscured for viewers. In 1911 Rudolf Steiner spoke about what he intended: “When we rest our physical eyes upon any one of these figures, it is not the physical eye alone but the whole organism and, above all, the streams of the ether-body which are set into a special kind of motion by the course of these lines and by the form of these figures, so that the ether-body moves differently according to which of these figures one is contemplating … These figures are the means by which we are instigated to create in ourselves the thought-forms, that is, the movement-forms in our ether-body… in a rhythmic sequence, so they form a complete whole, the sort of whole which corresponds to a particular stream of development in the outer etheric world…. The sequence of forms, which accord with the perfecting of our ether-body, is shown in the sequence of these figures, one after the other. “When we place before us such symbolic figures and are able to look more deeply into them, they can be a help in attaining those goals toward which we are striving in our own spiritual development. And when, by means of such a correct sequence we create appropriate thought-forms, we can then deepen our understanding of the rhythms that hold sway among the seven parts of the human organism. We have not placed these figures here merely as decoration, but because they are intimately connected with those goals toward which we are here to strive.” (From a lecture given by Rudolf Steiner on October 15, 1911; trans. Virginia Brett.)
Please submit files of completed art project(s), comments and questions via the online form or via email.
Copyright by Sophia Institute